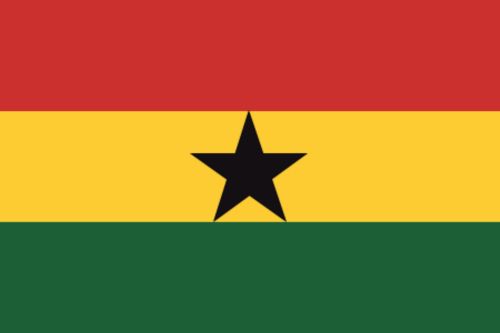 Ghana is a small country on the westcoast of Africa, connected to the Atlantic Ocean. Ghana is nearly as big as the United Kingdom in Europe and the connection to the UK is historically shaped by the colinial era.The name Ghana should connect the country with the „fabulous empire of Ghana“ on the African westcoast during the middle-ages.

But the Empire of Ghana was geografically positioned thousands of kilometers  more in the north-west of Africa and doesn’t have any connexion to the Ghana of today!Ghana has two metropoles, Kumasi and Accra, which also is the capital city of the country.In Ghana live about 30.000.000 people and the political system is democratic since the independence from the UK 1957 but there also were different military coups in 1966, 1972, 1978/79 and 1981 by Jerry Rawlings, who became also the first elected President of Ghana after the resurrection of the democracy.In 1992 Jerry Rawlings established the new constitution with free elections and freedom of expression and freedom of the press.Since 1957 Ghana became as the first „black African“ country a full member of the Commonwealth of Nations.In Ghana are exiting more then 75 different languages and dialects but the official language is English.71% of the Ghanaian people are Christian believers, most of them are protestantic, 17.5% are Muslims and 5% are part of the traditional religions.Ghana is well known because of the time of the slavery, the nowadays official seat of the President of Ghana is Osu Castle, which is the best known slavery-castle of Africa because of a lot of Hollywood movies and different TV-series like „Roots“.

To travel to Ghana you have to show some vaccinations against the following deseases:

But there are much more desease you should protect yourself against:

The medical care in the metropoles is okay but it is problematic on the countryside!In Accra or Kumasi are existing hospitals and private doctors offices enough but it’s recommended to wait for medical treatmaents of bigger deseases or operations until your return to Europe!

Ghana is a tropical country! There are no seasons.The only difference is existing between dry season and rainy season.The rainy seasons normally are from April to June and from September to October.​

In Ghana it is forbidden by the law to show male homosexuality of any kind in public!Gay men are often discriminated or blackmailed, also by the police (!), and physically abused!There also exists social discrimination of disabled people and people with HIV!Furthermore, the death penalty still exists in Ghana!The discrimination of the female part of the society still is a big problem in Ghana and nearly every third woman experiences domestic violence. Also there still is existing a lot of female genital mutilation.

If you need more or specific informations about Ghana or search for a direct contact to Ghana, we can help you out! The fiancé of one of our empoyees is living in Accra. So you can send your request to info@1earth-1world.com and we will forward this question to the fiancé …